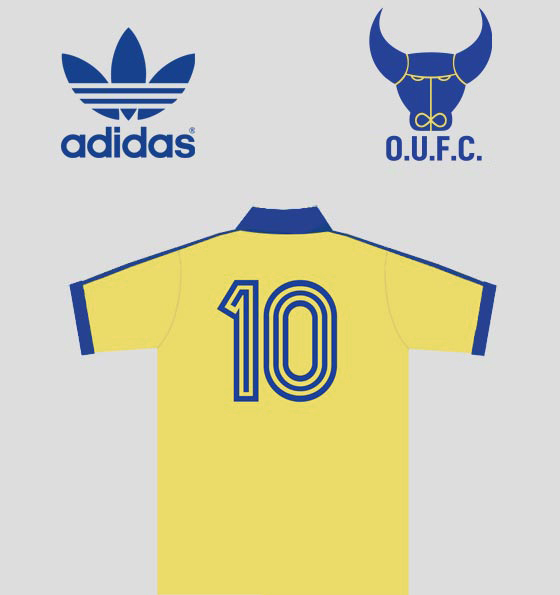 The first-ever Oxford United shirt sponsor was a local free newspaper. From memory, the Sunday Journal featured sports results from the previous day. It was owned by former club chairman Tony Rosser.

The 81/82 Adidas shirts were subtly different to the shirts used the previous season. The shirt collars were less flared and the Adidas badge was now positioned lower on the chest.

Once again, the yellow change shorts were the old Admiral shorts used during the 1970s. However, for the second half of the season Adidas yellow shorts were provided.

The official team photo shows the players wearing Adidas socks featuring the three hoops, however, it was more usual for the players to wear plain socks.

There were no alterations to the red change kit, and in all probability, it was the same garments as the previous season.

In 1979 Liverpool was the first English club to wear sponsored shirts in the football league. This had opened the floodgates for all clubs to seek lucrative sponsorship deals.

From 31st October, Oxford United began to wear sponsored shirts for the very first time. Local newspaper ‘The Sunday Journal’ featured on the yellow shirts only.

However, TV companies were resolute in refusing to cover matches which featured sponsored shirts, resulting in clubs having to wear plain shirts for televised matches. (Coventry City FA Cup).