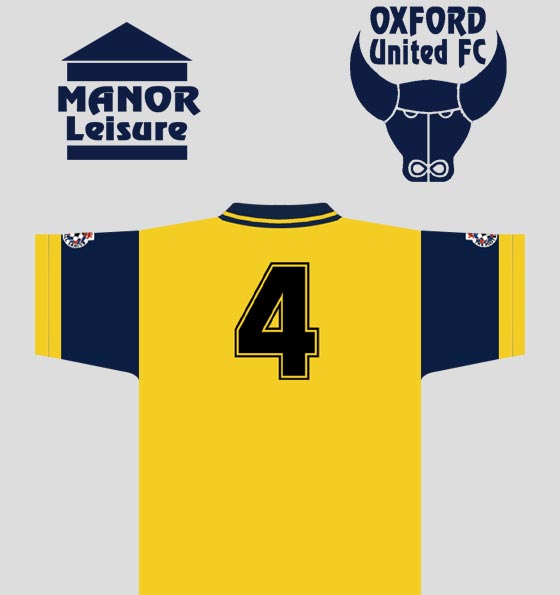 The club crest on the 1994 shirts was reproduced incorrectly, with the Ox’s nostrils hollow.

The mandatory Football League competition patches were now larger than the previous seasons.

Oxford United began overseeing the production of their own football kits under the brand name of ‘Manor Leisure’. The yellow shirts featured a subtle large club crest repeating within the front panel of the shirt.

The pre-season press photo-call showed the team wearing yellow socks, however, the club reverted back to navy socks as the official colours.

During August, the team played wearing a mix of sewn sans numbers and printed block numbers. By September all match shirts featured the block numbers.

A popular away shirt was introduced, in the same styling as the home kit but with an AC Milan inspired colour scheme.

This particular match is best remembered for a superb Paul Moody hat-trick, but less memorable was the fact that Oxford United wore Cardiff City’s away shorts and socks. The match referee deciding (quite rightly) that Oxford’s navy shorts and socks would clash with the home teams royal blue strip.

Amusingly, Cardiff City made exactly the same error for the return fixture, which resulted in Cardiff wearing Oxford’s yellow shorts and socks with their traditional royal blue shirts.