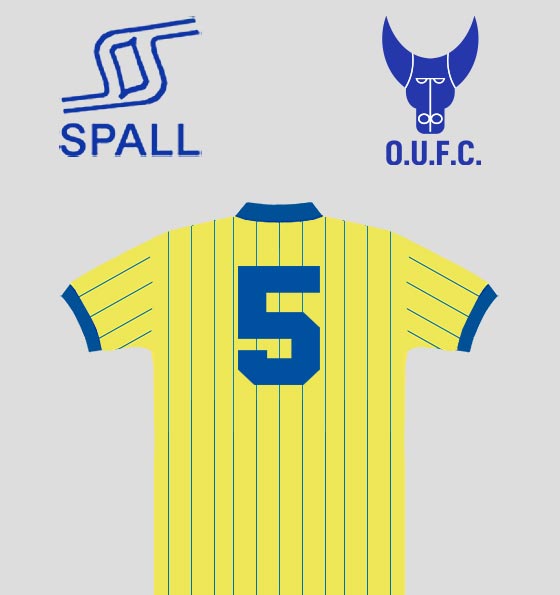 Once again, the shirt sponsors varied throughout the season. Factors such as whether it was a home, away, or televised fixture affected which shirts were worn.

The 83/84 season was to prove to be a wonderfully successful campaign for Oxford United. Not only did the U’s secure promotion as Division 3 Champions, but they also enjoyed a giant-killing cup run including 3 epic cup ties against Manchester United, which culminated in a memorable 2-1 victory.

The official kit remained unchained from the previous season. However, there were several variations of shirt styles used, so these particular shirts saw limited use in the second half of this season.

The Pergamon sponsored shirts were again used exclusively at the Manor ground for the majority (but not all) of the Division 3 matches.

These shirts saw less use in the second half of the season, with the introduction of new 'TV shirts' (see below).

The all red change kit remained unchanged from the 1982/83 season.

With both the yellow and the red shirts causing a colour clash at Bradford and Newport, Oxford United introduced an all white third kit.

These shirts were not printed with a sponsor. The basic design would go on to become the change colours for the following season.

TV companies finally relaxed their ban on football shirt sponsorship. However, they did insist that all sponsor logos must be half of the size permitted by the FA.

Shirts with a small BPCC logo were produced and were worn mainly for the Milk Cup matches.

However, the smaller logo was impossible to read from any distance and was certainly not distinguishable on the TV screens of that era.

The lack of clarity of the smaller BPCC logo (above) was not lost on Robert Maxwell, particularly as the club were enjoying prominent TV coverage with 3 games against Manchester United. A new set of shirts were provided, this time with plain bold black lettering.

These shirts made their debut in the second cup replay against Manchester United and would continue to feature regularly over the next season and a half.