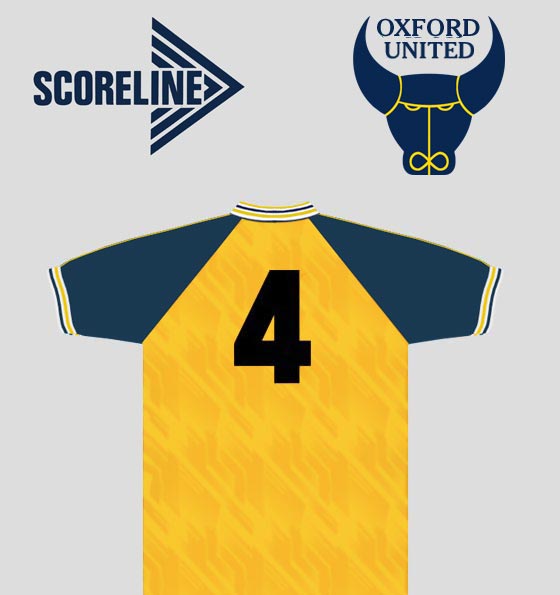 After several months without a sponsor, chairman Kevin Maxwell put his Pergamon Press company back onto the Oxford United shirts.

The gold shirts had a subtle ‘brush effect’ repeating pattern within the fabric.

The v-necks seen over the past 12 years were gone, with the shirts now sporting a predominately white rounded collar.

A dark crimson red change strip was adopted, near-identical in style to the home kit.

After several months without a sponsor, chairman Kevin Maxwell put his family's Pergamon Press business back onto the Oxford United shirts.

Around the same time, socks began to appear with an Oxford United club crest and Scoreline logo embroidered on the sides. These socks were often paired with an older sock, or worn inside-out with the embroidered backing visible.

The sponsor’s logo featured an ancient Greek coin from the city of Pergamon, this coin motif provided a number of variations to the player issued shirts.

From the Leeds United fixture, new short-sleeved shirts appeared with the motif positioned above the name.

For the very first outing of the red Scoreline strip, old red Umbro socks were worn. It is presumed there was a delay in delivery of the Scoreline socks.

For the away match at Port Vale, the 1988 ‘Wang’ Umbro shirts were worn. The reason for these shirts making an unexpected reappearance mid-season is puzzling.

At Portsmouth, Lee Nogan and Steve Foster wore long sleeved shirts featuring the sponsors name printed in white. These 2 odd shirts do not appear to have featured in any other match.