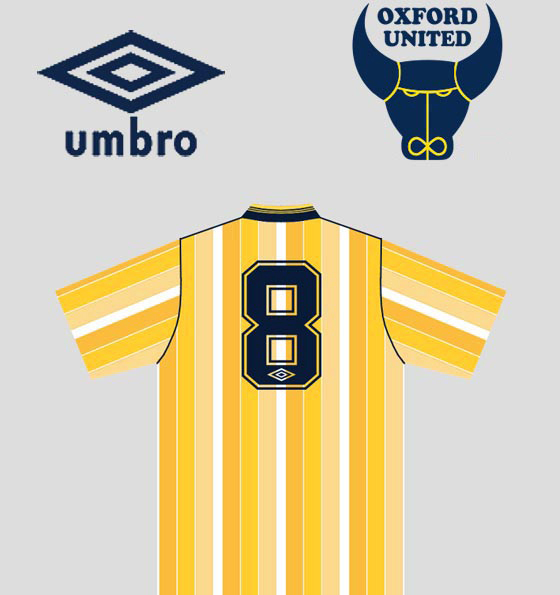 Although Oxford United had dropped out of the top tier of English football, their contract with Umbro ensured one more season with a fashionable kit supplier.

The shirts differed slightly from '87 shirts in that the white stripe was now in the centre of the shirt, whereas the '87 shirts had the middle of the three yellow stripes centred. Such attention to detail was not afforded to the fans replica kit, with most replica shirt stripes not even positioned symmetrically or matching front and back.

Oxford United returned to their familiar all-red change colours, with a smart design with interesting detailing.

Up until 1988, Oxford United had rarely used change colours unless their opponents wore Yellow or Gold. From this point the away kits were often worn even when there was no colour clash.

Now in its forth season, this white kit became a third choice and worn just once at Watford.

For the away fixtures at Plymouth Argyle and West Bromwich Albion, Oxford United packed their navy shorts but were requested to change due to a colour clash.

This resulted in Oxford having to wear shorts borrowed from their opponents kit room. Thankfully, on both occasions the shorts were white and coincidentally made by Umbro.

Later in the season, several replacement shirts appeared which had been manufactured with the stripe pattern in a reverse order. The pattern was also centred in the same way as the 1987/88 shirts.