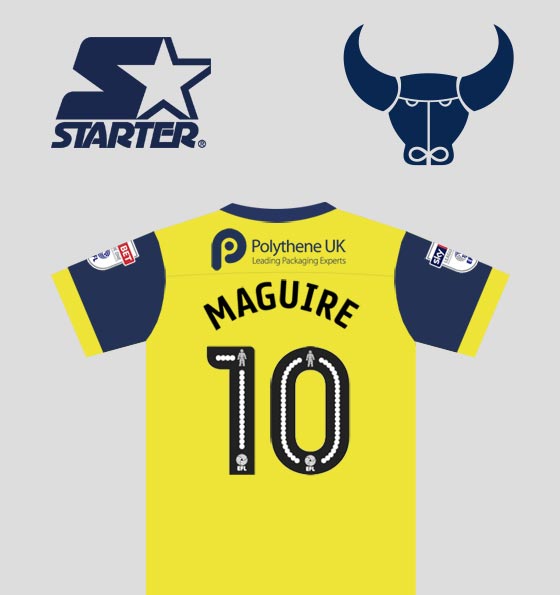 The Football League re-branded as the 'EFL' and introduced a new style of shirt numbers, letters and competition sleeve patches. 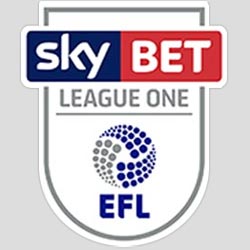 Liontrust and Polythene UK continued with their sponsorship and were joined by Alycidon Capital who became the rear shorts sponsor.

My critique of this kit is rather biased, as it is my design!  During the 2014 season, the club had run a social media campaign to gauge opinion from fans regarding their favourite former kits. I studied the feedback and submitted a kit design that combined features of the fans most popular kits.

The pinstripes and v-neck collar were a modern interpretation of the early 1980’s Spall shirts, whilst the sleeves were similar to the 1994-95 Manor Lesuire shirts

I had also suggested a return to the classic Minoan Ox crest, and this was adopted in time to feature on the 2015 shirts.

The name of American sports retailer Starter featured on the 2016/17 kits. Their name first appeared on the shirts worn at Wembley the previous season after Starter became involved as a ‘retail partner’.

The under-shirt base layers were now blue, as rules say they must be the same colour as the main colour of the shirt sleeve. I thought yellow would have been a more appropriate choice, but I guess ‘rules are rules’.

The 2016 change colours were a ‘reverse’ colour combination of the home strip. The contrasting shoulder and rib panels were identical styling to the goalkeeper jerseys

The goalkeeper strips were refreshed with much brighter colours following the dark affairs from the previous season.

For the home fixture against Scunthorpe, the Oxford goalkeepers were incorrectly wearing the blue kit, which clashed with Scunthorpe’s sky blue shirts and socks. The kick-off was delayed whilst this was hastily rectified. For the first half Simon Eastwood wore blue socks. Matching green socks were found for the second half.

The 2016 remembrance weekend again saw teams across the country wearing commemorative poppy shirts.  Once again, Oxford United had an away fixture, with the match shirts sold at auction to raise money for the Royal British Legion.

Oxford United organised an Armed Forces day for their next home fixture, with the players wearing armbands that featured a poppy motif.

Despite a high-profile fourth round tie against Newcastle, it wasn't until the fifth round that Oxford United wore shirts featuring FA Cup competition sleeve patches. These were worn away at Middlesbrough. 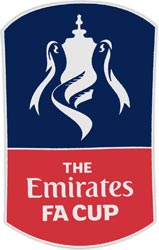 For the second year running, Oxford United reached the League Trophy Final at Wembley Stadium. The shirts featured Checkatrade Trophy sleeve patches and were printed with commemorative text on the chest. 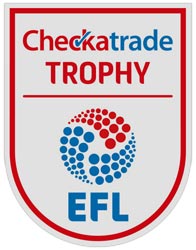 For the final game of the season, Oxford United released their 2017/18 home kit.

This is something that other clubs had been doing for several years. However, it was the first time that Oxford United had been commercially organised to be able to take advantage of the rule which permits this kit change for the final home fixture.

The idea is that clubs will benefit from retail sales during the quieter summer months, as supporters will be keen to show-off the teams latest apparel whilst away on their summer holidays.