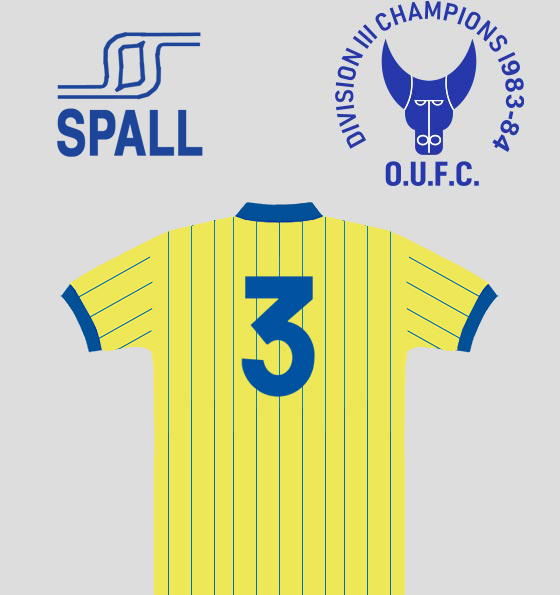 The shirt crest was wrapped in text commemorating the Division 3 championship.

The sponsor's logo was now in blue lettering and applied using crude sewn on characters. These particular shirts were to feature for just two months.

Other shirt and sponsor variations were to feature more regularly, details are outlined below.

Newly promoted Oxford United made light work of Division 2, and also made history, becoming the first English club to win promotion as champions in successive seasons.

Apart from the new style of BPCC lettering, the kits remained unchained from the previous two seasons, but there were subtle differences.

The shirt crest was wrapped in text commemorating the Division 3 championship, plus there were no longer the small Spall motifs that had previously featured on the sleeves.

The block numbers that had featured over the previous two seasons were replaced with a more traditional sans style.

The third choice kit from the 83/84 season was the template for a new all-white away kit.

This particular variation featured only once, away at Wimbledon.

From the middle of October, another Robert Maxwell business, the Sunday People newspaper became the primary shirt sponsor.

These shirt numbers differed to the short-lived '84 BPCC shirts. The sewn sans numbers were replaced with a screen-printed ‘block-shadow’ style.

When the TV cameras were present, BPCC sponsored shirts had to be worn, as only one sponsor was permitted to feature on TV during each season.

Interestingly, the newer BPCC shirts (with blue lettering) were never worn for the TV matches. Instead, the older 1983/84 shirts with black lettering were preferred.

It seems that for the TV games, a plain goalkeeper jersey was worn.